Log in
Get started
Blog
Guides
Thank you! Your submission has been received!
Oops! Something went wrong while submitting the form. 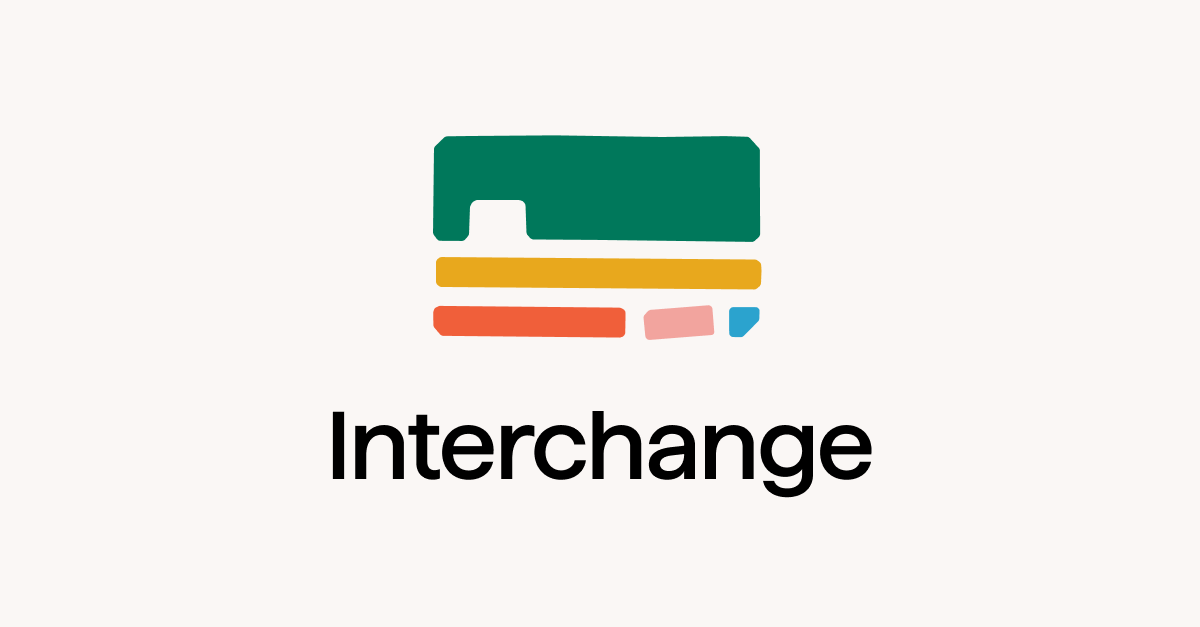 What is Interchange? How Fintechs Earn Revenue from Credit and Debit Cards

Interchange is a major revenue driver for many fintechs.

Companies that offer card products are growing revenue rapidly and securing massive valuations, such as Brex ($12.3B valuation) and Ramp ($8.1B valuation). Much of that revenue growth is due to interchange.

In this piece, we’ll break down the economics of interchange fees, their role in the payments market, and how founders can earn interchange by introducing new card products.

Every time a consumer swipes a card to make a purchase, the merchant pays an interchange fee.

Revenue from the fee gets divided among parties that facilitated the transaction: the banks that send and receive the payment, the card network, the payment processor, and—more recently—fintechs and businesses that embed payments.

While the fee for an individual transaction may only be pennies on the dollar, that revenue adds up over time. US merchants paid more than $110 billion in interchange fees in 2020.  Some fintechs get most of their revenue from these fees; others use interchange income to fund customer rewards that make their products stickier.

How does interchange work?

You go to a taqueria for lunch. You place a $10 order and swipe your card. On the consumer side, the transaction is simple enough, but more is happening behind the scenes.

The card network will move the money from the consumers' bank account to the merchants' bank account. In the process they will take their portion, and remit the interchange revenue amount to the issuer, who ultimately shares with the bank and fintech.

These seemingly small fees add up. Visa makes about 7.5 cents on average per transaction. Multiply that 7.5 cents by billions of transactions, and you get, multiple billions of dollars in revenue, just from interchange.

By launching your own card product, you can capture the 150-200 basis points (bps) on customer transactions rather than letting it go to the pockets of the traditional card issuing banks.

So interchange revenue is big money, but why do merchants even have to pay to get their money? To better understand how it works, it helps to understand why interchange exists. Let’s look at the history of interchange fees.

Why do card networks charge interchange?

Cards first appeared in the 1950s, but standard interchange was not introduced until 1971. The fees helped solve a major challenge plaguing early credit card networks: How do we get people to use this thing? Or, phrased differently: how do we achieve the network effect necessary to make it all work?

The complexities of the regulatory environment were one problem. Another was that banks at this time could only operate within their home states. Credit card issuers had to figure out how their cards would be accepted across this fragmented landscape and needed to give banks a financial incentive to issue cards to customers.

With interchange fees, banks could make money from card transactions, and the fees would be levied on the merchants because charging consumers more would have discouraged widespread adoption.

For merchants, the fee is a major cost. Andreessen Horowitz General Partner Alex Rampell, who previously worked at Visa, estimates that Target’s annual net income would double were it not for interchange fees. But cards drive more consumer spending: Dun & Bradstreet found that people spend 12-18% more when using credit card instead of cash.

It took a long time for debit and credit cards to gain the upper hand in payments. As recently as 2003, checks were the most popular form of non-cash payment in the US.

By 2020, cards had not only eclipsed checks, but had surpassed cash as the  most popular payment method. As cards have gained popularity, interchange revenue has grown six-fold in the past two decades.

Wondering how to calculate interchange rate? Well, calculating interchange rates is complicated. As of 2009, Visa had 60 interchange fee categories, and Mastercard had a staggering 243. Both networks release detailed tables annually that lay out the rates for every possible scenario of card payment (See examples from Visa and Mastercard).

Here are some broader factors that influence interchange rates.

Interchange rates on credit cards are significantly higher than those on debit cards. Credit cards accounted for half of transaction value on cards in 2020 and seventy-five percent of card fees. The reason for this disparity is that credit cards are a higher risk for issuers. Credit card debt is basically an unsecured loan.

Premium rewards credit cards gained popularity in the 1990s, offering consumers benefits like cash-back on every purchase. These benefits are financed through higher interchange rates, and have proven to be very popular with consumers. Increasingly, these rewards are also available with debit cards. There are also “enhanced” credit BINs that earn higher interchange fees, which in turn allow for higher cash-back.

Online purchases are less secure than in-person purchases. A fraudster only needs a card number and security code to make a transaction, rather than a physical card. These numbers can be acquired through data breaches. This higher potential for fraud results in higher interchange rates on online purchases.

Every merchant is categorized by the major card networks according to a Merchant Category Code (MCC). This means that there are different interchange rates depending on whether someone uses a card in a supermarket, a retail store, a gas station, or with some other form of merchant.

In addition to merchant categories, individual merchants may negotiate their own deals. A small supermarket might get charged one rate, while a massive retailer like Walmart might use its size and influence to negotiate a lower rate.

Networks that issue credit cards to customers with lower credit scores or less credit history, and whose accounts are therefore riskier, may charge higher interchange.

Size of the issuing bank

One VC said the Durbin Amendment would “perhaps be one of the most effective vessels of government funding towards innovation of all time.”

Size of the transaction

What is the Durbin Amendment?

Under the Durbin Amendment to the Dodd Frank Act of 2010, US banks with more than $10 billion in deposits can only charge interchange rates of up to 0.05 percent plus 22 cents on debit transactions.

The Durbin Amendment was part of a push to make small banks more competitive in an increasingly concentrated market. Banks with less than $10 billion of deposits can continue to charge non-Durbin rates. It’s important to note the amendment only applies to debit transactions, not credit.

Durbin-exempt banks now average 44 cents in interchange per debit transaction, compared to 23 cents for Durbin-regulated banks. Those cents add up.

The Durbin Amendment has created a win-win situation for startups and small financial institutions. These Durbin-exempt banks have more interchange to share per transaction, enabling the partner fintech to bring in significant money.

According to The Information, Chime (a leading neobank) earned $600 million in interchange revenue in 2020.

It isn't just fintechs that are benefiting from interchange. Vertical SaaS companies are increasingly embedding financial products, particularly cards, into their core product. By offering payment cards to their customers, SaaS companies can increase customer retention and earn a meaningful share of the interchange revenue generated.

How to monetize your product using interchange

At a high level, interchange revenue is fairly straightforward: Your company issues a card, then you earn revenue when your customers use it. But there are a lot of different ways to do this.

What kind of card do you issue? How does that card meet customer needs? And how do you use your interchange revenue?

In the below example, let’s explore how one startup company is leveraging interchange income to rapidly grow their business.

Ramp is a spend management startup that helps corporate clients manage their expenses and find savings. The company is now valued at $8.1 billion and has grown to $100M in revenue run rate in two years from launch—due in large part to interchange.

Ramp’s card combines two traditionally high-interchange categories: credit cards and commercial use cases. Because Ramp can charge relatively high interchange, the company has been able to introduce card benefits like 1.5 percent cash back on all purchases. The reward makes the card stickier, and the more clients spend, the more Ramp learns about them from the transaction data. Ramp is then able to strengthen the core services of their software offering.

This is why, despite offering the core software for free, CEO and co-founder Eric Glyman says he still sees his company as a SaaS operator.

Other potential uses for interchange revenue

There are a number of other ways a company can integrate interchange revenue into its business model.

Your company could issue prepaid debit cards to contractors, enabling your business to earn commercial interchange rates when they purchase items they need for work. If the cards are prepaid, you also simplify the reimbursement process—or remove the need for reimbursement altogether. Or if you’re a retail company, you could issue debit cards to customers that offer special rewards for shopping with you or partner retailers.

Interchange serves as a source of revenue, but also as a way to enhance your business. When you use it to fund a rewards program, you’re able to build deep relationships with your customers and clients. The deeper you build that relationship, the more people use your card, and the more interchange revenue you earn.

At Lithic, we can help you issue cards to your customers and suppliers insanely fast.

If you want to earn interchange revenue, contact us.

Thanks for subscribing!
Oops! Something went wrong while submitting the form.